“General Tso’s Chicken (Simplified Chinese: 左宗棠鸡; Traditional Chinese: 左宗棠雞; Pinyin: zuǒ zōng táng jī;)” is Majority Han’s popular dish in Hunan cuisine, main foodstuff of which is chicken, and it is also well recognized by American. Through this dish is named as famous general Zuo Zongtang in Hunan province, actually there is no close relationship with him. General Tso’s Chicken is a brother of Pork Fillet with sour and sweet sauce. 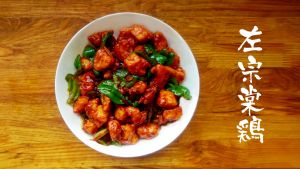 This dish looks golden yellow, is tender with a crisp crust, a variety of flavors and integrates sour, sweet, crisp, spicy, fresh and fragrance.

“General Tso’s Chicken” is not created by Zuo Zongtang. The inventor of this dish is Peng Changgui who is a master chef of Hunan cuisine. In 1952, Admiral Arthur William Radford, US commander of the seventh pacific fleet visited Taiwan. The person Liang Xuzhao who is in charge of reception gave banquet in 3 consecutive days and Peng Changgui was invited charging kitchen, and Peng Changgui was required to offer different dishes for individual day. It seems that cooking methods of braised with soy sauce, steamed in clear soup and dripped with hot oil are so common. In order to change tastes for guests, he sparkled creating a new dish by cutting chicken into big dices and frying golden yellow and stirring with sauce and seasoning condiments. Radford was surprised by this new dish and asked what the dish name is. 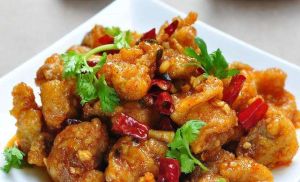 In addition with Zuo Zongtang is from Hunan province and this dish belongs to Hunan cuisine, in order to make the name of the dish loud, the dish is titled with "General Tso’s chicken ".

In 1970, Jiang Jingguo with his attendants went to Peng Yuan to have dishes. The chef served “General Tso’s chicken” for Jiang Jingguo. Jiang Jingguo praised it delicious and introduced this delicious to others the second day. This dish consequently becomes the signature dish of Peng Yuan.

In 1973, Peng Changgui went to America and ran a Peng Garden restaurant. Once, ex-sectary Kissinger entertained banquet in Peng Yuan and latterly he always patronized there. Every time Kissinger went to Peng Yuan, security maintenance person booked the whole restaurant for safety, which is similar with the free advertising for Peng Yuan. Kissinger likes “General Tso’s chicken” very much and praised if after tasting. This story was reported with extensive coverage by the Medias of “Washington Post” and “New York Times” etc, and this dish obtains its big reputation and gradually becomes “Must-have dish” in America.

Nutritional components are largely lost due to its complicated cooking process. Before frying the chicken must be cut into small dices, and subsequently added sauce with excessive sugar. Through this dish is served with vegetables, the negative unhealthy effect of sauce exceeds the nutritional value they provide, which makes this dish the most unhealthy option.

Add some salt, corn starch and egg mixture and mix for further use;

Put the pickled chicken leg meat in a pot with oil and fry for 2 minutes, and then remove it;

Prepare a frying pan, add some ginger, chili and garlic until fragrant, and put chicken in and pour sauce juice in, and stew for 3 minutes;

Dish out with covering some coriander; 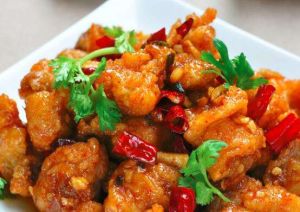 “General Tso’s chicken” broadly spreads with its golden yellow color, tender meat with a crisp crust and integration with sour, sweet, crisp, spicy, fresh and fragrance. This is an excellent dish for drinking.