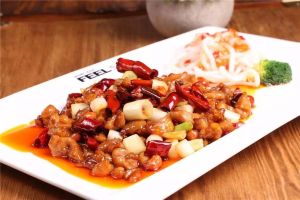 Kung Pao Chicken, also called Kung Pao Chicken Ding (Simplified Chinese: 宫保鸡丁; Traditional Chinese: 宮保雞丁; Pinyin: gōng bǎo jī dīng), is a famous traditional dish with Chinese characteristics at home and abroad. The origin of this dish is related to the “Sauce-fried chicken” in Shandong cuisine and the “Pepper-fried chicken” in Guizhou cuisine. Later, it was improved and developed by Shandong governor of Qing Dynasty and Ding Baozhen, governor-general of Sichuan Province, and formed a new dish, Kung Pao Chicken, which has been passed so far. This dish is also incorporated in Beijing court cuisine. After that, Kung Pao Chicken was also spread abroad.

The color of the dish is red but tastes not spicy, a little bit spicy but not hot, strong flavor of savory, and meat tastes smooth and crisp. The chicken meat is fresh and hot and tasty accompanied with tasty and crisp peanut

Kung Pao Chicken is estimated to be 118 kcal per 100 grams of calories. 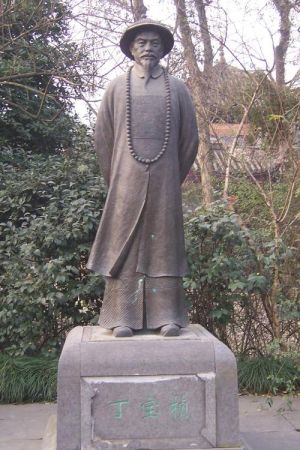 This dish is created by Ding Baozhen, governor of Shandong, governor-general of Sichuan in Qing Dynasty. He is well posted up in cooking, likes eating chicken and peanut, and especially likes spicy flavor. When he served in Shandong province, he ever ordered chef to improve the cooking method of dish “Sauce-fried chicken” in Shandong cuisine by spicy-fried. Later, when he served in Sichuan as governor-general, this dish was created and spread, in which the chicken is fried with red pepper and peanut and formed a delicious. Originally, this dish is a private dish of Ding family, but latterly it is familiar by the people who call it Kung Pao chicken.

The so called “Kung-Pao” actually is an official title of Ding Baozhen. The imperial court of Qing Dynasty recognized his achievements and merits and posthumously conferred him the “Officer who tutors the crown prince”. 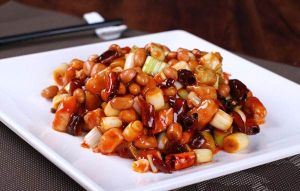 Chicken is the main foodstuff of Kung Pao Chicken, that is cooked with peanut, cucumber and pepper etc.

Add 20 grams of salad oil in pot, heat the oil to 70% heat (that is, when large quantities smoke over the oil surface rises) and stir-fry the chicken breast until the meat is white and well-cooked, and then put it in reserve for further use.

Add 15 grams of salad oil in pot, heat the oil to 70% heat (that is, when large quantities smoke over the oil surface rises), and add 8 grams of dry chilly, 30 grams of soybean paste, onions, ginger and garlic slices in, fried until the fragrance come out, and stir-fry for 2 minutes.

Kung Pao Chicken is rich in protein, calcium, phosphorous, iron, vitamins and carbohydrates etc. that has the efficacy of tonifying Qi, nourishing the five internal organs, strengthening spleen and stomach. Intake of it you can nourish your body, improve appetite, promote health and enhance organism resistance.