Bo Bo Chicken (Simplified Chinese: 钵钵鸡; Traditional Chinese: 缽缽雞; Pinyin: Bō bō jī;). As one of the traditional Sichuan snacks, the Bo Bo Chicken is one dish of Sichuan cuisine. It has a history of hundreds of years since it was widespread in the Qing Dynasty. The bone-free chicken slices are held in a pottery bowl, being mixed with adding with a variety of seasonings, especially hot and spicy one. The Bo Bo Chicken has crisp skin and tender meat, tasting spicy, fresh and fragrant, moderately sweet and salty. A Bo Bo Chicken is especially recommended while you are having milk soup noodles—that is unique in taste and will make you unforgettable! In 1990, Bo Bo Chicken won the High-quality Award of the Renown Folk Snacks in Chengdu, and in 1991, it was named as the High- quality Snack by the Chengdu municipal government. 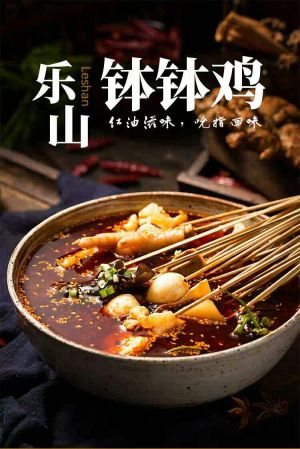 The finished chicken is not be bloodlessly bright. The color of the Bo Bo Chicken should be fleshly red and white with greasy brightness. Soy sauce should not be put in seasoning so as not to hurt the natural color of chicken. After the chilis are refined into chili oil, wait for one day or two before use the oil—it makes the chili oil redder and brighter, ensuring the finished chicken looks better.

What is Bo Bo

The name of the Bo Bo Chicken feels rather novel for those who first hear of the name. Bo Bo Chicken is a folk special dish. Judging from its name, we can learn that Bo Bo Chicken is similar to Chuan Chuan Xiang (the hot pot with stick-stringed meats and vegetables). The name "bowl" (or “Bo Bo” in Chinese pronunciation) is actually a earthen pot-shaped bowl, and the outside of the bowl is enameled with red and yellow porcelain dragon patterns. The bowl is filled with rich seasonings, mainly hot and spicy ones, the materials of the dish (meat and vegetables) are processed and stringed with sticks, and then immersed in the sauces with different flavors of seasoning, both the stick-stringed food materials and the sauces can be customized by the guests according to their own appetite; in addition to satisfy different tastes of the guests, it makes the process of the buffet dinner full of interest.

With profound historical origin and a variety of flavors to choose from, the Bo Bo Chicken is easy to bite; it can either be leisurely tasted as a snack or be enjoyed as a dinner, along with uniquely featured Rice Cooked with Chicken Soup. Bo Bo Chicken can not only feast your tongue, but also feast your eyes. The chicken shall be stewed well-done, but the meat shall not be overdone; after the chicken is done and wait for it cooling down, cut it into pieces, string the chicken pieces with bamboo sticks orderly (sliced meat sticks, viscera sticks, sticks of chicken legs, sticks of chicken wings, etc.). Put the chicken in the rattan pepper sauce and lift it to your mouth—mouthwatering? Definitely not! Exactly, ”mouth-oiling”. The bowl (Bo Bo) holding the chicken is also exquisite and feasts your eyes. The blue and white enameled earthen bowl is the first choice as the utensil. It’s perfect for pink meat, green soup and the blue-and-white porcelain like earthen bowl. With the camphor wood and cinnamon wood inlaid here and there, and the outside is tightly covered with bamboo strips, the whole chicken container looks like a traditional ethnic basin.

The chicken shall be of those native chicken breed and often make movements—they are raised on the hillside of the country, the active muscle ensures the incomparable tender and fragrant taste, even the flavor of the cartilages and bones bring you appetite!

One of the important secret recipe for the aroma of the Bo Bo Chicken is the use of the rattan pepper (Zanthoxylum schinifolium etzucc) oil. Rattan pepper oil may be born for cooking Bo Bo Chicken. In July, rattan pepper fruits turn from green to purple, exquisitely shaped and attractively hanging on the branches. Pick fresh peppers down and put them in pottery bowl, soaking with hot rapeseed oil, padding with fresh taros, lotus leaves and banana leaves to cover the aroma. The sauce mixed with rattan pepper oil looks crystal and green, spicy but not greasy, the fragrance immerses deep in your heart, and even penetrate the whole street. Followed by the fragrance, the chicken mixed with rattan pepper oil brings you with freshness of the mountain area. 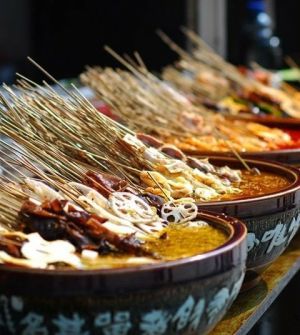 Stewing chicken: After the rooster is slaughtered, dress it, remove the fluffy hair and internal organs, then wash and stew it until there is not blood smell, and then bail out the chicken, and then cook the soup by adding some pork bones in it.

Cutting chicken into slices. After the chicken is dried, trim it and remove the bones, and then cut it into slices.

Seasoning and filling the chicken slices in the bowl: add refined salt, chili, Chinese red pepper, pepper powder, refined white sugar and SMG to a basin, mixing them evenly, and put them in the bowl on the table, and then scoop a ladle of chicken soup in the bowl.

The chicken has the tonic properties of replenishing heart and Qi (vitality), supplying vital essence and marrow, tonifying deficiency and intelligence. It is an ideal brain-tonifying food for children, white collars, the elderly and the weak.