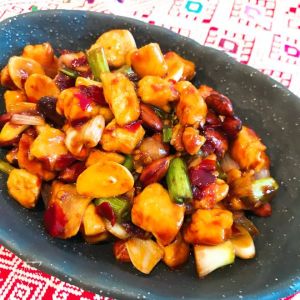 Almond Chicken (Xing Ren Ji) is estimated to be 473 kcal.

Originated from American Chinese restaurants. American big almond can be applied in this dish. Peeled peanut or the other nuts that is suitable for your family can also be used to substitute almond.

Almond functions nourishing lung, also served as medicated food with flavors of fragrance and sweetness, which has effects of suppressing cough, anti-inflammatory, assisting digestion and so on.

Peanut is very popular throughout the world. It is not only delicious but also is with rich nutrients, the most favorite advantage of which is strengthening your spleen and stomach. Modern medical studies certificates that it does not contain cholesterol but contain high level of oleic acid functioning to lower blood lipids; in addition, it is a natural food with low sodium. Eating peanut with its “red skin” can help grow hair, black hair, nourish blood, supplement blood and do well to female health.

Cut the breast meat into dices. Stir almond and stand it cool, and cut the celery into small dices.

Add a little bit oil in pot, put chicken dices and cooking wine in, and stir it until meat changes white.

Throw together a quick stir-fry with almond and chopped pepper.

By the above cooking method the dish maybe very hot, people who is hot addicted can put hot pepper earlier.