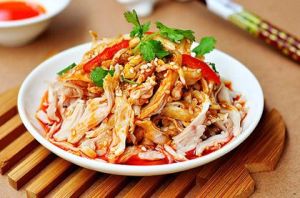 The flavor of this dish belongs to pungent aromatic with a variety of flavors, spicy, sour, sweet, fresh, salty and aromatic.

Bang Bang Chicken (Bang Bang Ji) is estimated to be 182 kcal per 100 grams of calories.

It is stated that in Ming Dynasty and Qing Dynasty, there are persons who loves delicious very much in very rural area in Yaan city. After long-term investigation and practices of soup combination, the cooked chicken is very tasty and the soup-stock is confidential with capsicol fragrance which makes person’s mouth watery. But the productive force is low, and chicken is luxurious to eat. Normally it was eaten on New Year’s Day and the other festivals. Someone came up with a clever trick that cutting the whole chicken into very thin slices and selling by slice. The sales came out to be very good. “Chicken slices” became very popular. From then on, a new problem appeared that the chicken cannot be sliced evenly and customers were strict with the slice size when purchasing. 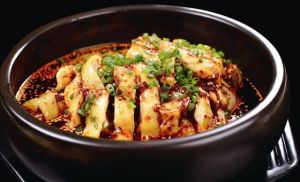 So, distributors used wood stick as standard, which guarantees the chicken is cut evenly and meat is tasty.

When the cutting is done, it needs 2 persons to cooperate tacit; one person uses knife and another person uses stick, when the stick knocks at knife blade back, the sound changes with strength, rising and falling in cadence and self-paced which feels like listening to music. So this dish is called “Bang Bang Chicken”.

The meat quality of chicken is tender and fine with fresh taste, and it can be added with a variety of seasoning condiments due to its light taste. The protein content of this chicken in very high, and is one of the meats with highest protein content. This chicken belongs to a food with high protein and low fat.

The reason why “Bang Bang Chicken” is cooked with stick hammering is to loose chicken muscles, tastes with seasoning condiments and easily to chew. 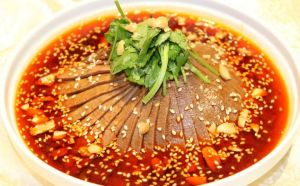 Cook chicken in pot and cook until medium well.

Cover the lid, stay stuffy for a while until it's ripe;

Tear into strips, topped with seasoning, and garnished with parsley;