What is Mao Cai 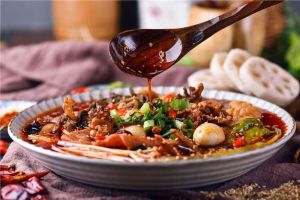 The most orthodox way to enjoy Maocai is to eat with “dry spice plate”, that is, to place dry chili powder in a small dish, add spices like salt and gourmet powder, then gently dip the blanched ingredients in the dry spice plate, and stuff them into your mouth. Maocai tastes spicy, hot, and really delicious.

Mao Cai is estimated to be 68 kcal per 100 grams of calories.

In the first version of records, Maocai originated from Sichuan marinated food. Sichuan marinated food and cold food in sauce are famous across the country. Some lazy people directly bought cooked food from the market for convenience and economy. As marinated food was kept in brines, the sellers would add some spices and traditional Chinese medicines so as to avoid wasting the grease in brine, and then blench some vegetables in it. The blenched food tasted good, so they began to sell it together with the cold dishes. The dish sold well, which has thus generated “Maocai”. 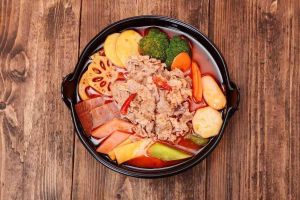 In the second version of records. In late Eastern Han Dynasty, due to warfare for successive years, various diseases broke out, and the soldiers lost their appetite; in order to prevent the spread of diseases, the military doctors often asked the cooks to add some Chinese medicines into the food, which can not only prevent and remedy diseases but also produce aroma and flavor the food. Medicines were mixed with the spices to make marinated ingredients. Later, all kinds of vegetables were blenched and cooked in terms of the improved recipe.

Mao Cai is a feature of Chengdu. Maocai is a dish cooked through by sauce brewed from traditional Chinese medicines and a variety of condiments; the food is stuffed in a bamboo spoon, and a serving size is often one spoonful; blench the food in a pot, then transfer it into a bowl with prepared condiments, and add a spoonful of sauce, and sprinkle parsley, chopped green onion and Sichuan-specific fermented soya beans over it, hence the most famous and distinctive Chengdu snack “Maocai”. To put it simply, “Maocai is the hotpot for one person, while the hotpot is Maocai for a group of people.” 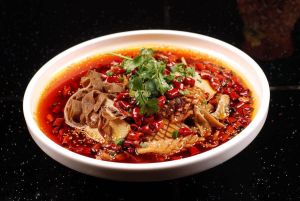 Comparison of Mao Cai, Chuan Chuan Xiang and Chong Qing Hot Pot is probably that Mao Cai’s soup can also be drunk, few people may dare to use a spoon to taste the soup base of delicacies skewers and hotpot. 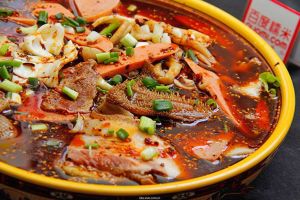 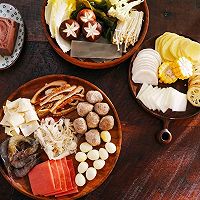 All ingredients should be prepared beforehand. 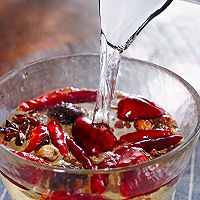 Various spices are soaked in warm water for 10 minutes. 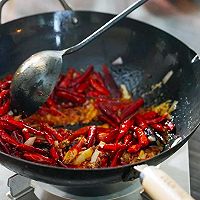 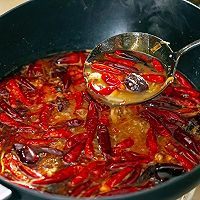 Add the well fried spices into the soup-stock. 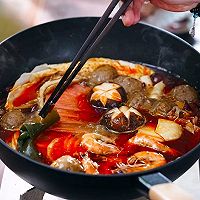 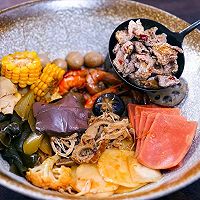 Serve the cooked ingredients on the plate. (Note harder cooked food first wok cook for a while) 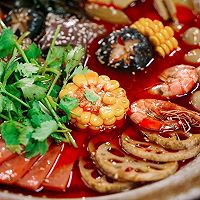 Pour the filtered soup. It's done. 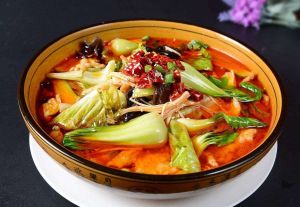 A spice compounding similar to brine. After eating all the ingredients, you can still enjoy the delicious, mild soup base.(Medium calories)

Put the ingredients into a large pot filled with tap water, cook them thoroughly, transfer them into a bowl, and then add some spices and sesame oil.(Fewer calories)