Yang Chun Noodles (Simplified Chinese: 阳春面; Traditional Chinese: 陽春面; Pinyin: yáng chūn miàn;), also called the plain noodles or plain noodle soup, is a kind of noodles that served only with noodles and soup. It is included into the Suzhou Noodle Soup. Yang chun noodles is a famous traditional noodles originated from Shanghai. It tastes refreshing and savory, and is deeply loved by the local people. 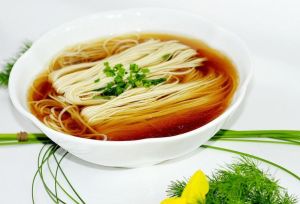 Yang Chun Noodles (Yang Chun Mian) is estimated to be 104 kcal per 100 grams of calories.

Yang Chun is referring the tenth month of Chinese lunar calendar. And it is Chinese custom to call ten “Yang Chun”. The noodle was priced as ten. So people call the noodles Yang Chun noodles and the name is still used now. 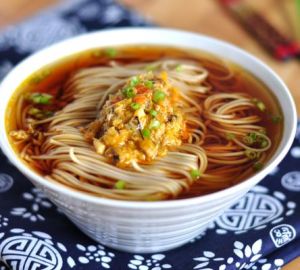 Yang Chun Noodles is very easy and quick to prepare and make, but there is one key ingredient that must be used: lard. Lard is the spirit of the noodles, and without it there is no flavour. If lard is not available for you, seasame oil can be a good alternative choice.

1. In serving bowl, combine soy sauce, sugar and lard (or sesame oil). 2. In another pot with boiling water, cook the noodles accordingly. 3. Pour around 2 cups of liquid for cooking the noodles into serving bowl to tune the seasonings. 4. Transfer noodles and top with chopped spring onion. 5. Serve hot!