Chongqing noodles (Simplified Chinese: 小面/重庆小面; Traditional Chinese: 小面/重慶小面; Pinyin: Xiǎo miàn / chóngqìng xiǎo miàn;) is a term for a variety of spicy noodle dishes that originated and exist in Chongqing, China, which are collectively referred to as xiǎomiàn, literally "little noodles" in English. Xiao mian is also prepared in other areas of the world, such as the United Kingdom and areas of Australia and the United States.[1] 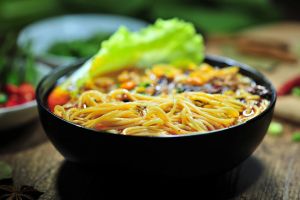 Chongqing, the sprawling city along the Yangtze River, until recently part of Sichuan province, is noted for its distinctive and assertive cooking. It's relatively different to the cuisine of the Sichuan capital, Chengdu - spicier, more pungent and more incendiary than anywhere else in China. Chillies, Sichuan pepper, hot bean paste (doubanjiang), sesame seeds, ginger, garlic and pickles form the backbone of Chongqing's distinctive style, creating dishes of great complexity.

One of the most famous dishes from this city is Chongqing noodles. A dish that will bring tears of nostalgia to Chongqingren folk, this local speciality is mouth-numbingly spicy and addictive. Simply called xiao mian, meaning small noodles, this street food has an obscure history - some of my friends in Chongqing believe it first appeared in the early 20th century in the city's humbler neighbourhoods. A bowl of noodles built typically on everyday ingredients with some fiery, belly-warming spices, it rapidly became the noodle dish of choice for locals. Since then, this mala - hot and numbing - dish has spread globally.

Chongqing Noodles(Xiao Mian) is estimated to be 132 kcal per 100 grams of calories.

Xiao Mian refers to as “little noodles” in English, is a noodle dish made with many fresh herbs and spices and while can be made to order, usually has the unique spicy-numby flavor that the locals love.

The locals love Xiao Mian as much as they love hot-pot, and enjoy it in the morning, lunch, dinner or night. In the morning, many small, hole-in-the-wall street-side Xiao Mian restaurants are thronged with people, who choose Xiao Mian to start the day. No matter who you are, an office worker on their way to work, or a “stick-stick” porter starting another hard day of work early birds often get their morning’s energy for working or studying from spicy and delicious Xiao Mian. Xiao Mian is truly “the people’s food”. For those Chongqing locals far away from home, Xiao Mian is their “comfort food”, and they often choose Xiao Mian as the first meal when they come back.[2] 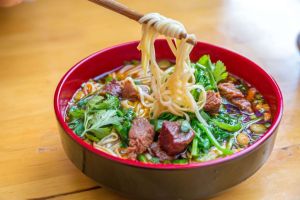 There are two types of Xiao Mian: noodles with broth and noodles without broth. A bowl of Xiao Mian usually uses more than 10 spices and condiments such as Szechuan pepper, chilies, spring onions, and etc. Otherwise, there are many different toppings can choose for Xiao Mian like beef, shredded chicken, or pork and so on. Thus, it is not only a dish but an art form in Chongqing.

After years’ development, there are many other types as ramifications of Xiao Mian: Daoxiao Mian (noodles peeled from a dough directly into the pot), Pugai Mian (shape of noodle looks like blankets), etc. These ramifications usually use the same condiments and toppings as Xiao Mian’s, but chew feeling is totally different from Xiao Mian. You can experience the real Chongqing life by getting some Xiao Mian.

Chongqing noodles are typically prepared using wheat. There are two main types of xiao mian dishes: noodles with soup and noodles without soup. Chongqing noodle dishes are typically spicy and prepared using a variety of spices, seasonings and sauces.Sichuan pepper is often used in the dish's preparation. Myriad meats and vegetables are also used in its preparation. Various garnishes and condiments are also used, such as spring onions and chili oil

bring a saucepan of water to the boil.

add chilli oil and some of the flakes, soy sauce, sesame oil, peanuts and preserved vegetables to taste into serving bowls.

Divide the noodles into serving portions and blanch them in boiling water.

Place the noodles in the serving bowls. Ladle in the chicken stock and sprinkle the soup with spring onion to serve.[3]