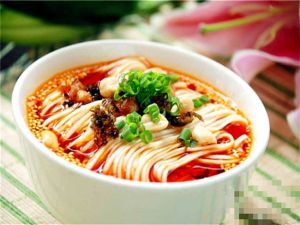 Sesame paste and/or peanut butter is sometimes added, and occasionally replaces the spicy sauce, usually in the Taiwanese and American Chinese style of the dish. In this case, dandanmian is considered as a variation of Sesame Paste Noodles (Ma Jiang Mian 麻醬麵), sesame sauce noodles. In American Chinese cuisine, dandanmian is often sweeter, less spicy, and less soupy than its Sichuan counterpart.[1]

Dan Dan Noodles (Dan Dan Mian) is estimated to be 146 kcal per 100 grams of calories. 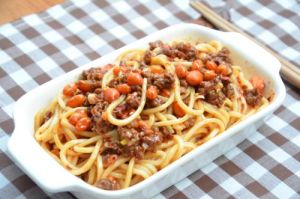 he name refers to a type of carrying pole (dan dan) that was used by walking street vendors who sold the dish to passers-by. The pole was carried over the shoulder, with two baskets containing noodles and sauce attached at either end. As the noodles were affordable due to their low cost, the local people gradually came to call them dandan noodles, referencing the street vendors. Literally, the name translates as "noodles carried on a pole", but may be better translated as "peddler's noodles". 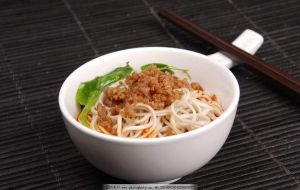 A variety of English spellings are used. The first word may be either dandan, dundun or tantan, and the last word may also be spelled mein (Cantonese pronunciation).

Dan dan Noodles (担担面, dan dan mian) is one of the most famous of Sichuan street foods. The freshly boiled egg noodles are served in a savory, spicy broth topped with crispy pork and peanut flakes. Simply stir everything together with a pair of chopsticks to coat the noodles with a bit of everything and slurp! The numbing, smoky, spicy sauce will shock your taste buds, leaving you craving for more.

In Sichuan restaurants in China, the dan dan noodle dish is more of a snack than a main and is usually served in a small bowl. The noodles are more soupy — mostly immersed in a thick red broth made with chili oil, with a small amount of pork on top. The broth can sometimes be too spicy to handle for most people, but it depends on the chef.

When the dish was introduced in the US, it was transformed and now looks more like a pasta dish — boiled noodles with a meat sauce on top. Sometimes the sauce is more sweet and sour than spicy, almost like a General Tso stir fry (e.g. the Dan dan noodles at Pei Wei). Sometimes the chef will mix Chinese sesame paste into the chili oil to make the sauce creamier and mellow out the spiciness.[2] 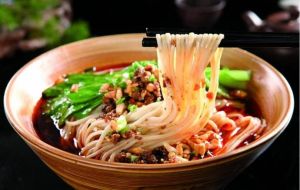 Add the crushed red pepper flakes and allow them to steep in the hot oil. It should start smelling fragrant, almost like popcorn. Allow the oil to cool. This makes more chili oil than you’ll need, but you’ll be glad to have it on hand for use in other dishes. Store in a glass jar and keep refrigerated.

In a wok, heat a teaspoon of oil over medium heat, and brown the ground pork.

Add the sweet bean sauce, shaoxing wine, dark soy sauce, and five spice powder. Cook until all the liquid is evaporated. Set aside. Heat the other 2 teaspoons of oil in the wok over medium heat, and sautee the sui mi ya ci (pickled vegetables) for a few minutes. Set aside.

Mix together all the ingredients. Taste and adjust seasoning if you like. You can loosen it with more hot water, add more Sichuan peppercorn powder, etc.

Cook the noodles according to package directions and drain. We used fresh noodles, but dry noodles are great too. I actually might prefer the dried, because they’re a bit less starchy. (Now would be the time to add some of the noodle cooking water to your sauce). Blanch the greens in the noodle water, and drain. To assemble, divide the sauce among four bowls…Mixed vegetables and noodles etc![3]