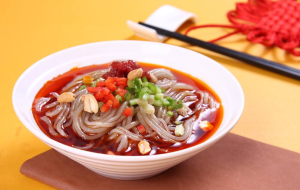 Hot and Sour Sweet Potato Noodles is named after its highlight of hot and sour taste. Year after year, after continuous evolution and improvement of the recipe by the southwestern people, it was gradually listed on the menus of the snack bars along the streets and officially became a popular specialty snack throughout China.

Suan La Fen (Hot and Sour Noodles) is estimated to be 98 kcal per 100 grams of calories.

There are two kinds of Hot and Suan La Fen(Sour Sweet Potato Noodles): one is “wet type noodles”, which are freshly made by the mixture of sweet potato starch;

The other is “dry ttoe noodles”, which are drying processed sweet potato noodles. Since the Hot and Sour Sweet Potato Noodles made by the dry noodles is relatively simple and convenient, the dry type Hot and Sour Sweet Potato Noodles are generally used. The procedure of "wet type noodles" is complicated, but the highlight is that the noodles are made on the spot, fresh, hygienic, and better reveal the traditional craftsmanship.

In terms of the ingredients of Hot and Sour Sweet Potato Noodles, there is a way to learn from Chongqing Noodles. For example, the use of Chili oil and rattan pepper (Zanthoxylum schinifolium etzucc) to obtain the basic positioning of the flavor. However, the inherent physical characteristics of sweet potato noodles determines that they do not absorb the seasonings as well as Chongqing small noodles.

The vinegar with strong appetizing taste can stimulate the aroma of other seasonings to form a more appetizing complex aroma, so that the spicy and sour taste of Hot and Sour Sweet Potato Noodles can be smelled distantly. 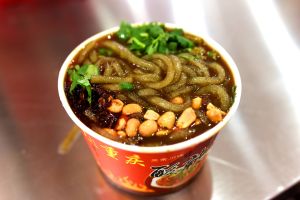 Sprinkle the vermicelli in warm water for about 10 minutes until it is soft. Stir the sesame in a wok and serve it for a short time; heat the pan, fry the peanuts and soy beans until becoming crisp.

Heat up the oil in a pot, put in minced meat and add a little salt, fry it until cooked, and then take the meat out of the pot.

Pour the broth into the pot and heat up for boiling.

Pour in the soft vermicelli, heat up until the soap boils.

Pour in the spinach and beans for half a minute, then bring the noodles soup into a bowl.

Pour minced meat and sauce into the bowl, sprinkle with peanuts, soy beans, cooked sesame seeds and shallots. And now, the job's done.