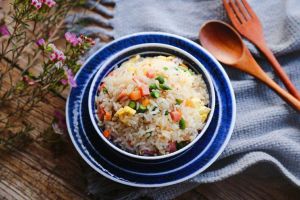 Yangzhou fried rice is very strict with raw materials and cooked sophisticatedly and exquisitely, and focuses on colors matching. After frying, each grain of rice is dispersed well, loose, with approximate chewing hardness, color harmony, full gloss and various ingredients, and this dish is fresh and tender, smooth and delicious.

Yangzhou Fried Rice (Yang Zhou Chao Fan) is estimated to be 146 kcal per 100 grams of calories.

It is stated that when Emperor Yang of Sui Dynasty visited Jiangdu (current Yangzhou), he introduced his favorite "Broken golden rice" (Fried rice with eggs) into Yangzhou. Also some scholars think Yangzhou fried rice originally came from the ordinary citizens. 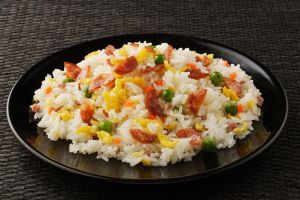 According to investigation, as early as the Spring and Autumn Period, boatmen sailing on Hangou(邗沟) of Yangzhou ancient canal began to eat fried rice with eggs. In the old days of Yangzhou, if there was leftovers for lunch, one or two eggs were beaten, seasonings such as chopped onions were added, and leftovers were fried to make fried rice fried with eggs at dinner time.

In Ming Dynasty, the chefs in Yangzhou supplemented ingredients and shaped the embryonic form of Yangzhou fried rice.

During Jiaqing of Qing Dynasties, prefecture official Yi Bingshou(伊秉绶) in Yangzhou began to add shrimps meat, diced lean meat and ham etc. on the basis of Fried rice with eggs, and gradually evolved into a variety of mixed “Fried rice with eggs”, which tasted more delicious.

Afterwards, Chinese people, especially chefs in Yangzhou, who made a living overseas spread Yangzhou fried rice all over the world.

Egg is rich in protein, fat, vitamin, ion, calcium and potassium etc that are needed by human body.

Meat is tender, fresh and succulent, and is rich in protein content and can be absorbed and utilized.

Ham is tasty and its nutrients can be easily absorbed. 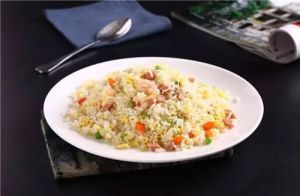 Add oil and in a frying pan and heating and make omelets.

Add shrimp meat and continue stirring and season with salt and pepper powder.

1. Diabetics patients should not eat more of it.

2. Patients who have kidney diseases or is too high with blood cholesterol are restricted to eat it.