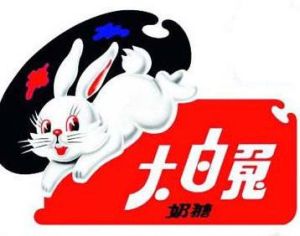 White Rabbit Candy(Simplified Chinese: 大白兔奶糖; Traditional Chinese: 大白兔奶糖; Pinyin: Dàbái tù nǎi táng;) is the original milky sweet candy from China. This White Rabbit is a delicious and creamy snack candy with a thin sheet of edible rice paper wrapped around it making it a unique and classic candy that people have loved for decades.

White Rabbit Creamy Candy is white, with a soft, chewy texture, and is formed into cylinders. Each candy is wrapped in a thin edible paper-like wrapping made from sticky rice. Paper can to eat.

White Rabbit Candy is estimated to be 400 kcal per 100 grams of calories. 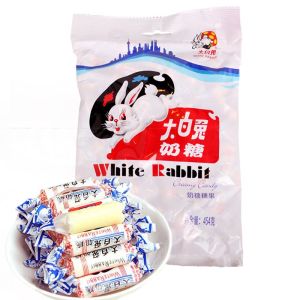 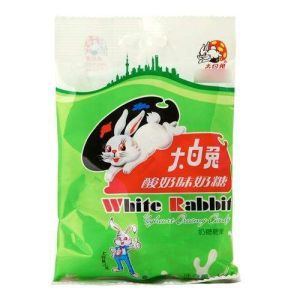 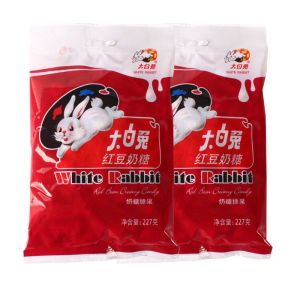 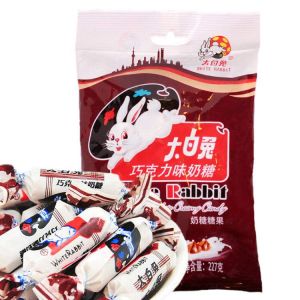 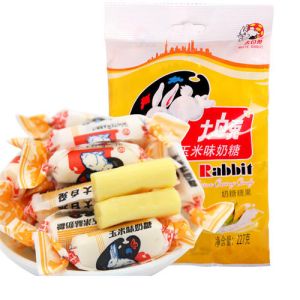 White Rabbit sweets have been advertised with the slogan, "Seven White Rabbit candies is equivalent to one cup of milk", and positioned as a nutritional product in addition to being a sweet. The candies hence accompanied the growth of a generation.

White Rabbit Creamy Candy originated at the ABC Candy Factory of Shanghai in 1943, when a merchant from ABC tried a milk candy from England and thought that the taste of the candy was not bad. After half a year of development, he then manufactured the factory's own brand of milk candies.

The milk candies now known as White Rabbit first appeared in the 1940s, and have been synonymous with Shanghai ever since. Their iconic branding and edible rice paper wrapping occupy a special place in the city’s collective memory and history.

Originally launched by private company ABC in 1943, and inspired by British creamy candy, the sweets were first called Mickey Mouse Sweets, and the wrappers featured the famed Disney rodent.

During the political upheaval of the 1950s, private companies such as ABC were nationalised and the use of Western imagery became politically sensitive. The rodent became a rabbit in 1959, and White Rabbit candies were officially launched.

In 1976, ABC (by then renamed Ai-Ming) was absorbed by the state-run Guan Sheng Yuan Food Co. Originally producing the sweets at Caobao Road in Shanghai’s city centre, Guan Sheng Yuan’s new factory opened in 2013 a few hours south of central Shanghai, in a development zone nestled amid rural farmland and streams in Fengxian district.

In 1959, the candies were given out in the city as gifts for the 10th National Day of the People’s Republic. Former premier Zhou Enlai – who was said to always have a bag on his desk – gave White Rabbit candies as a gift to American president Richard Nixon during his historic 1972 visit to China.

In 2013, President Xi Jinping visited the new factory in southern Shanghai, and handed out the sweets to officials and children on a visit in the same year to Mongolia.

When more than 52,000 children were made ill by melamine-tainted dairy products in China, White Rabbit was listed among the many milk-based food products that were found to be contaminated with the chemical compound. British supermarket chain Tesco removed White Rabbit sweets from its stores, while food authorities in Australia, the US and Singapore issued cautions or recalls over the product. All this affected the brand’s reputation and sales.

Undeterred, the brand has been mounting a comeback during the past decade. White Rabbit now only uses imported milk powder from New Zealand to reassure consumers. In a bid to compete with imported brands, the company has introduced a variety of new flavours, including chocolate, peanut, red bean and yogurt. There are now more than 30 products in the White Rabbit brand line – although the classic flavour remains the bestselling sweet.

Shanghai’s White Rabbits are now exported to more than 40 countries and territories, finding particular popularity in Southeast Asia, including Singapore, Thailand and Malaysia.

The sweets are also sold in the US and Europe. Exports only account for about five per cent of total sales, but Guan Sheng Yuan has ambitions to grow this. As these retro sweets forge into new markets, new consumer groups and new tastes, balancing tradition and modernity will be the key challenge.[1]

A private company in Shanghai first launched ABC Mickey Mouse Sweets, drawing inspiration from the popular cartoon. However, it wasn't until 1959 when the White Rabbit logo was introduced to its candy wrappers.

China's premier Zhou Enlai loved the candy so much that he gave a batch to US President Nixon in 1972 as a gift.

That marked the beginning of how the candies eventually became known internationally. It is now being sold in more than 50 countries.[2]