Twice Cooked Pork or Double-cooked Pork (Simplified Chinese: 回锅肉; Traditional Chinese: 回鍋肉; Pinyin: huí guō ròu).The famous twice cooked pork is a traditional Chinese dish originated from the Sichuan region. It is widely believed that it was first invented by peasants in Song Dynasty (12th century). It is so popular that almost every family in the Sichuan area know how to make the dish. A novice to kitchen can learn this dish quickly, but on the other hand it is a very hard to cook even for professionals, for only few can make it to perfection[1]. 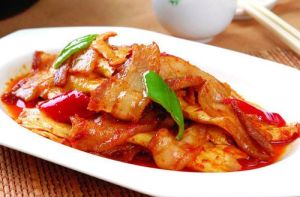 In ancient Sichuan area, peasants use boiled pork as a sacrifice in the ancestor worship ceremony. After the ceremony is finished, the peasants would then twice cook the pork as a dish. Bold enough to eat the sacrifice to the dead, Sichuan people have a rather realistic attitude towards formal ceremony.

Sichuan is called Heavenly Land, where is rich in producing pigs, thus providing sufficient supply for making this dish. Twice cooked pork has been such a popular dish to Chinese people's dining table that it can be found throughout the country.

1. Cook the pork in boiling water till it’s well-done, then put it away and let cool

2. Wait until it is cold and cut the pork into large, thin slices

3. One tea spoon of oil, pork and ginger slices into the pan over medium heat, until the pork turns brown

5. Stir fry until chili oil comes out and then add one spoon of bean sauce and cooking wine (replace it with wine if cooking wine is not available). Beware, the beanpaste contains salt so you don’t want too many of that.

7. Stir fry till the peppers are just tender

The Sichuan people have a tradition of enjoying a feast every 1st and 15th of lunar months, with twice-cooked pork as the main course.