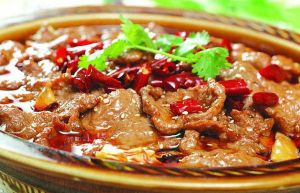 This dish is rich in spicy, smooth and tasty with strong flavor, which has the hemp, spicy and hot characteristics of Chong qing hot pot.

Sichuan Boiled Beef (Shui Zhu Niu Rou) is estimated to be 94 kcal per 100 grams of calories. 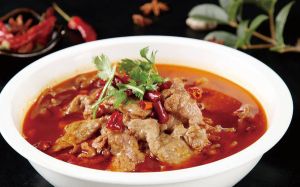 According to legend, during the Northern Song Dynasty, in the area of Zigong, Yandu of Sichuan province, people installed a pulley in the salt well and use cattle to extract brine. Most a strong cattle normally can serve for more than half a year and some of them were exhausted in three months. Therefore, there are always some obsolete cattle, and the local salt is extremely convenient to use. So the salt workers slaughtered the cattle, took meat slices, and placed them in salt water with prickly ash and chili to cook. The meat is so tender and fresh that it is widely spread and becomes a traditional dish; this is the earliest "Sichuan Boiled Beef(poached sliced beef in chili oil)."

In Ming Dynasty, chili is imported from South America. People in Sichuan broadly applied chili to cook due to its de-moisturizing function, and at this time chili was applied in Sichuan Boiled Beef(poached sliced beef in chili oil). 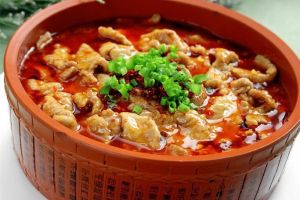 Latterly, the cooking method of Sichuan Boiled Beef(poached sliced beef in chili oil) was improved by the chefs, that the sliced beef is not cooked using frying method, but cooked well in spicy soup. This dish is famous and spreads all over China. 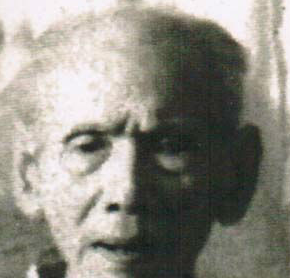 This dish was created by Fan Jian(范吉安), a famous chef of Zigong in Sichuan province. Chef Fan Jian is good at summarizing experiences in practice of cooking, is insisted in improving and renovating. Originally, the sliced beef was cooked well in boiling water and ate with seasoning condiments that is consisted of salt, soya sauce, chili and prickly ash. In 30's last century, he upgraded the "Beef in ginseng soup" to "Sichuan Boiled Beef(poached sliced beef in chili oil)" that is a high ranking delicious for principal food and liquor, and becomes a famous dish in Sichuan province with local flavor characteristics. 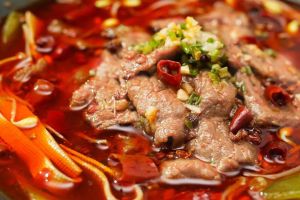 Cut beef into slices and mix with a little bit salt, cooking wine and starch

Wash lettuce clean and break apart and put into boiling water for a while. Remove and place on the bottom of bowl.

Sliced beef pickled with soya sauce for one day for complete tasty.

Break American celery apart and put on the bottom of pot, and add water at 70%.

Put pickled beef slice in after the water is boiling, and cook for a minute.