Rice noodle roll or Chang Fen (Simplified Chinese: 肠粉; Traditional Chinese: 腸粉; Pinyin: Cháng fěn;) originated in Luoding, Guangdong, and has spread all over the country. The rice noodle roll in Guangzhou is transparent and tastes like jelly. Generally the sauce is the mixtue of soy sauce and other sauces. The taste is a bit sweet, and most of the ingredients are lettuce. The rice noodle roll of Chaozhou is white and tastes savory and glutinous. Most of the sauces are oyster sauce and peanut butter, with a variety of vegetables as garnish. 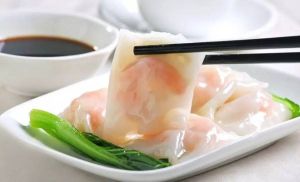 Rice noodle roll or Chang Fen(肠粉) is estimated to be 110 kcal per 100 grams of calories.

Kun Ban, another special flavor snacks in eastern Guangdong, Gannan and other Hakka areas, is made of rice milk and then steamed with iron cooking utensils to form a thin piece of rice film similar to flat rice noodles, the cooking method is the same way to Chui Chang Fen (steamed rice noodles). It is said that after the Hakka ancestors moved from the north to the south, since the south did not grow wheat, no wheat flour could be used for making spring rolls, so they adopted rice flour instead of wheat flour to make spring rolls. It could be an invention, making the spring roll—the northern food widespread throughout the south with a new taste. This process of grinding rice into rice flour steaming into rice mile is the forerunner of modern rice noodle roll.

As early as the Tang Dynasty, two monks of Longzhou (now Luoding City, Guangdong Province), named Huineng and Huiji respectively, occasionally created a food called You Wei Zi (a fried pastry). Since You Wei Zi was too thin to be divided into pieces as before, they had to shovel the pieces out the pan into a pile and then cut them into sections (or as a whole) to eat. This is the origin of the recipe of rice noodle roll though at that time it was not yet called the rice noodle roll. In order to distinguish the new kind of food from the previous You Wei Zi, people called it You Wei Zi Slices.

During the Qianlong period, once Emperor Qianlong traveled to the south of the Yangtze River, he was bewitched by the gourmet and minister Ji Xiaolan, and specially make a detour to Luoding to taste Long Kan Zi (later name of You Wei Zi Slices). While he gobbling this "cool, tender and smooth" rice noodle roll, Emperor Qianlong was full of praise and bestowed rice noodle roll the name ”Chang Fen”. 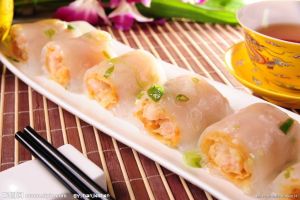 In Cantonese cuisine, rice noodle roll is most often served in dim sum. The most common types traditionally offered as part of dim sum cuisine are:

Other modern varieties that may be offered include:

A version of cheungfan notably absent outside of Guangzhou is the sliced meat filling variety. This variety is typically found in street side restaurants as a meal in itself, and uses whole meat pieces, typically beef or pork, rather than ground meat. Prior to rolling the crepe, briefly blanched lettuce or romaine is added as part of the filling, giving the cheungfan a crunch as well as volume.

Ipoh, being another food capital of Malaysia, Chee cheong fun is mainly served in two ways, the dry or wet versions. In the 'dry version', it is served with bright red sweet sauce and in most cases, chilli sauce as well as pickled green chilli. In the 'wet version', it is served with curry with pork rind and long bean or minced meat and shiitake mushroom gravy. Both dry or wet versions are topped with sesame seeds and fried shallots.

Teluk Intan, one of the town in the state of Perak, has another variations of Chee cheong fun which contain turnips, shallots and deep fried shrimps.

In Vietnamese cuisine, there is a similar dish called bánh cuốn, and it is mostly eaten for breakfast. It is a crêpe-like roll made from a thin, wide sheet of rice noodle (similar to Shahe fen) that can be filled with ground pork and other ingredients. Sides for this dish usually consist of chả lụa (Vietnamese pork sausage) and bean sprouts, while the dipping sauce is called nước chấm. Sometimes, a drop of cà cuống, which is the essence of a giant water bug, Lethocerus indicus, is added to the nước chấm for extra flavor, although this ingredient is scarce and quite expensive.[1] 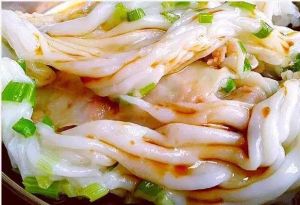 Stir the lean pork into mince, adding marinade to marinate for 10 minutes.

Cut the scallions into slices and crack several eggs, prepared as ingredients for use.

Brush the dish with a layer of vegetable oil, add minced meat, add a tablespoon of paste, and then add the scallion slices and the evenly beaten eggs.

Boil the pot with water and put the dish on the steamer.

Cover the lid and steam the dish of paste for about 3 minutes (open the lid, if you see the paste bubbling, it means the steaming is done).

Fold the thin pancake into rice noodle rolls with a shovel

Chang Fen is rich in protein, starch, trace elements, vitamins and so on.