Long Chao Shou(Simplified Chinese: 龙抄手; Traditional Chinese: 龍抄手; Pinyin: Lóng chāo shǒu;) is a famous traditional snack in Chengdu. “Chao Shou” is a special term for wonton in Sichuan. The origin of the name “Chao Shou”: Chengdu's "Long Chao Shou" has a history of more than 70 years. It is originated from Yuelaichang (a wharfing fair in Chengdu) in 1941, which was moved to Xinjichang (the new fair) in the early 1950s, and then moved to the southern section of Chunxi Road in the 1960s.

Long Chao Shou is mostly called “wonton” in the north, and in some places in Shandong, it is called Gu Duo (ravioli); it is called Yunton in Guangdong. Wonton was originally used by the people as a sacrifice food. 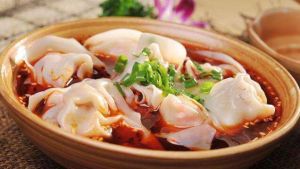 Long Chao Shou (Dragon Wonton) is estimated to be 184 kcal per 100 grams of calories. 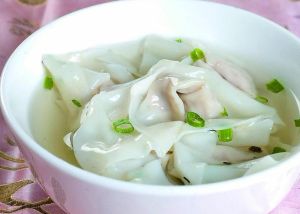 Wonton, also known as yunton, was originally used for sacrifice.

During the Winter Solstice in the Song Dynasty, all shops were closed and each family were preparing wonton to sacrifice the ancestor. There were over a dozen kinds of stuffing, so it was then called "One Hundred Tastes of Wonton".

The brand “Long Chao Shou” was founded in the 1940s. At that time, Zhang Guangwu and other fellows in Chunxi Road were about to open a joint ventured snack shop of Chao Shou. When taking the name of the shop, they adopted the word "Long"—the homonym of “Nong (thick)” —which is to advertise that their soup is thick; on the other hand, the Chinese character “Long” also remind people of the idioms “Long Feng Cheng Xiang”(which means the Auspicious Scene of Dragon and Phoenix) and “Long Teng Hu Yue”(which means as vigorous and enthusiastic as a mounting dragon and a leaping tiger), hence the name "—Long Chao Shou". 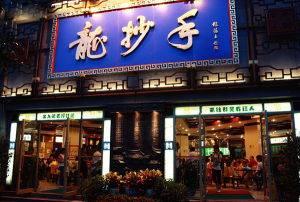 Put the flour on the board in a concave shape, add a little salt, crack an egg in it, add water to mix it evenly, and knead it into a dough. Then roll it out as thin as a piece of paper with a rolling pin, and cut it into 110 pieces of four-finger side-length squares as the wrappings.

Hack the fat three to lean seven proportioned pork with the knife back to make it soft enough, then remove the tendons, and then chop it into fine mince; add Sichuan salt, ginger juice, one egg, pepper powder, MSG, and mix them up evenly, and then add the right amount of water, stir the mince into stiff paste, and then add sesame oil and mix well, so that get the stuffing ready for use.

Wrap the stuffing into the wrapping, fold the four corners together into a triangle shape, and then fold the left and right corners to the middle tightly to form a rhombohedral Chao Shou.

Put the wrapped Chao Shou into the pot and cook it done.

Add Sichuan salt, pepper, MSG, chicken oil and the cooking soup in a bowl, ladle the cooked Chao Shou into the bowl. And now, the job's done.