Laziji (Simplified Chinese: 辣子鸡; Traditional Chinese: 辣子雞; Pinyin: là zǐ jī) is a classical Shandong cuisine. Generally the whole chicken is cooked with addition of onion, dry chili, prickly ash, salt, pepper and glutamine etc. while the cooking method of this dish may differ in different region with their own characteristics. 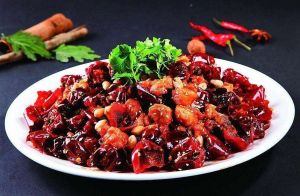 For Laziji, different region has different cooking method with their own characteristics and it is welcome by the local people. The spicy chicken shows color of shiny brownish red and it tastes spicy with thick flavor.

Laziji is estimated to be 183 kcal per 100 grams of calories.

There are 2 ways of saying one thing in Qujing. One is, villager couple of Gong Guofu (husband) and Ding Liqiong (wife) who live in No. 6 village, Hongxing agency, Xiping town, Zhanyi city ran a restaurant using their own 2 bungalows by the national road 320 in 1987. The main dishes of their restaurant are homely dishes, and latterly husband Gong Guofu who likes to research created an unique cooking method for Zhanyi spicy chicken based on spicy chicken of Guizhou province, and this dish spreads rapidly and this couple devotes to this Spicy chicken. This small restaurant’s reputation gets round fast in Yunnan province. 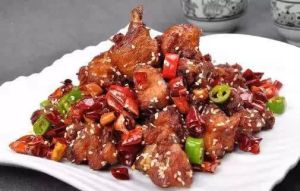 The second is, Gong Hongyun, the young sister of Gong Guofu, wrongly put a bowl of chili powder into the pot and stirred with chicken Spring festival 10 years ago. Fortunately and unexpectedly, a spicy and tasty unique dish is created. She ran a small restaurant by the street in 1987 and gradually she devotes to this Spicy chicken.

It does not matter which one is reliable. Actually, brother and sister Gong run a ‘Spicy chicken restaurant’ respectively that stand side by side where is at Dongfeng gate of Zhanyi city, people of Qujing witness the whole process of their growth step by step from a very small scale restaurant. 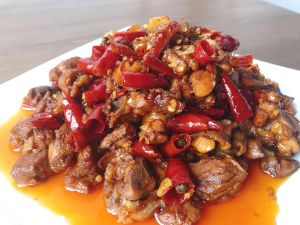 Pepper, half a spoon

Remove bone from chicken and cut it into dices.

Mix the dices with pickling condiment and stand for half an hour.

Add a big bowl of oil in a small pot, medium heating until oil splashes when a dice is put in.

Put all the dices in when the oil temperature is appropriate.

When the meat color changes, fry 2~3 minutes more, and then pick them up and place on kitchen paper to absorb extra oil.

Put a little bit oil in a wok, and add onion sections and ginger until fragrant, and add prickly ash and dry chili in.

Chicken protein is rich in all the essential amino acids that are quite similar with the amino acids profile in egg and milk. So it is a better protein source that can be easily absorbed and utilized by human body, enhance strength and strengthen body.