锅包肉 (English name: Fried Pork in Scoop), formerly known as "锅爆肉", was first created during the Guangxu Emperor by the hands of Harbin chef Zheng Xingwen(郑兴文). When the dish is ready, golden color, sweet and sour taste.

Fried Pork in Scoop is to adapt to the taste of foreign guests, the savory taste of the "charred pork strips" into a sweet and sour dish. Usually sliced pork tenderloin marinated in flavor, coated with fried batter, fried in a pot until golden brown, then stir-fried and thickened.

In 2022, Harbin potted pork was selected as a national "Landmark Cuisine List".

In the Qing Dynasty, Zheng Xingwen, a Eight Banners, came to Beijing with his father at the age of 6, and gradually became interested in cooking. In 1907, Zheng Xingwen went to Harbin Binjiang Daoyamen as a chef, preparing meals for Daotai Du Xueying(杜学瀛). Daotai Mansion often hosts foreign guests, especially Russian guests. Because foreigners like to eat sweet and sour tastes. Du Xueying ordered the chefs in the house to change the taste of the dishes. Zheng Xingwen changed the original salty and fresh taste of "scorched pork strips" into sweet and sour dishes, which made Harbin the origin of Fried Pork in Scoop(锅包肉).

This dish is so popular with Russian guests that it is ordered at every meal. It is called "pot bursting meat" because it is quick-frying with rapid fire, heating the iron pot, pouring the juice into the pot and soaking it into the meat. Russians pronounce "爆" as "宝(bao)", and over time, "锅爆肉" evolves into "锅包肉".

Before the Xi'an Incident, the three eastern provinces were under the jurisdiction of the Zhang family, and many dishes in Daotai Mansion were forbidden or private. After Japan invaded Heilongjiang, some folk crafts and gourmet recipes gradually flowed out, and pot-wrapped meat also began to spread in Harbin and outside. The people of Liaoning have transformed Guobaorou, and the last step is to use tomato sauce or tomato sauce. The appearance is very similar to Harbin's "cherry meat", which reduces the original crispy and golden color of Guobaorou. 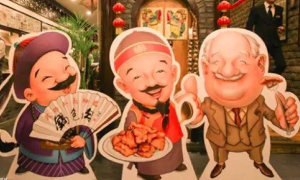 In 2014, Harbin's century-old dish "Fried Pork in Scoop(锅包肉Guobaorou)" appeared in the restaurant where it was "born" with three Q-version images of "Chef Zheng 郑大厨, "Du Daotai 杜道台 and "Wasily 瓦西里". its own promotional image.

The three Q-version images are based on Zheng Xingwen 郑兴文, Du Xueying 杜学瀛, and the image of a Russian. They are displayed in the form of cartoons, which are lively and interesting.

The Q-version promotion image was designed for Guobaorou, which aims to let this famous dish show its profound historical and cultural connotations, and to reproduce the background of the era when the Guobaorou came into being.