What is Century Egg 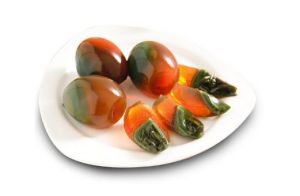 Century Egg(Simplified Chinese: 皮蛋 or 松花蛋; Traditional Chinese: 皮蛋 or 松花蛋.; Pinyin: pí dàn or sōng huā dàn), Century Egg (pí dàn) is a traditional Chinese egg product that tastes delicious, refreshing and salty, and boasts unique color and fragrance. Its main raw material can be duck or chicken eggs. Century Egg is not only popular among domestic consumers but also enjoys a high reputation in the international market. After particular processing, the eggs will turn dark and bright, with white pattern and a special smell all over. It is one of the favorite foods of the masses.

The special flavor of Century Eggs derives from the fact that being affected by strong alkali, the original sulfur-containing amino acids are decomposed and then produce hydrogen sulfide and ammonia, as well as the flavor of add-ins in steeping fluid.

Century Eggs can be preserved for a long time (3 to 5 months) if the eggshell can remain unbroken. However, once the eggshell cracks and breaks, the eggs will stink in three days and generate parasites in a week at a high temperature. So you should always remember to place the eggs in a cool place.

Century Eggs may have evolved from the salted duck eggs recorded in Important Arts for the People’s Welfare(《齐民要术》) in the Northern Wei Dynasty. Century Egg was first recorded explicitly in Miscellany of Bamboo-island Workshop(，《竹屿山房杂部》) completed in 1504, also the 17th year during the reign of Emperor Hongzhi of Ming.

Nowadays, Century Eggs have become common food in civil life and banquets, and are also exported overseas. In the past, a certain amount of Huangdan powder (lead oxide) was added to produce Century Eggs, and the high lead content is harmful to human health. However, China has already invented low-lead and lead-free Century Eggs since the 1980s. 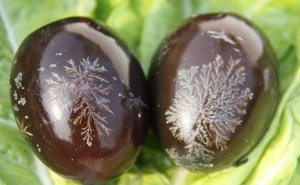 Weishan Lake Century Egg, according to the records, has a history of more than 500 years since the early Ming Dynasty, and Weishan Lake is also an important producing area of Century Eggs. Weishan Lake Century Eggs have been developing itself while being served all over the country. In the 1920s, Jin Zaixing, a native of the town, started to run a salted colored egg store called Jiuchang to produce and sell two kinds of Century Eggs, “Hucai” and “Jincai”, among which the latter turned out to be more distinctive. “Jincai” eggs are not only nice in color, but also taste refreshing, smooth and non-spicy. As a delicacy that goes well with wine and porridge, this kind of Century Eggs sells well in Jiangsu, Zhejiang and Shanghai, and has even been exported to Southeast Asia. 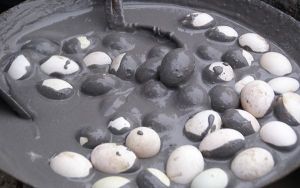 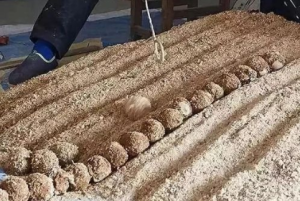 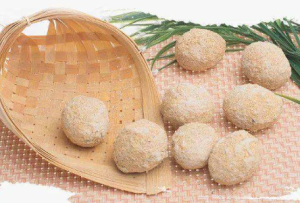 then put them into the jar and seal it with plastic film, and the finished products come out after 30 to 40 days of preservation at a room temperature of 15 °C ~30 °C.

Cut the Century Eggs into pieces, chop up the peppers and garlic.

Transfer the eggs to a plate, and spread the chopped peppers and garlic in the middle, then sprinkle the well prepared condiments, including cooked oil, soy sauce and sesame oil, onto the plate.

Mix them evenly before eating. 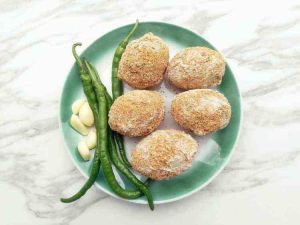 Century Eggs contain lead, so if you eat them too often, you may suffer lead poisoning, which will result in symptoms such as insomnia, instability of attention, anemia, joint pain, slow thoughts, and poor brain functions. Moreover, lead will replace calcium and affect calcium intake, thereby causing the calcium deficiency.

If you are pregnant, please don't eat century eggs. century egg is not good for pregnancy

Children can't eat Century eggs, because preserved eggs contain a lot of lead, which will affect the baby's development, which is not good for the child's body. Lead will be stored in the liver, not conducive to the body.

Patients with liver and kidney diseases

They should abstain from eating Century Eggs.